Welcome. This post will contain information about active Proud Boys in the state of Montana. Montana PB are a fairly small group, but rapidly growing and should be considered an active cause for concern if not an active threat to their community. Despite existing only loosely for less than a year, MT PB have been seen at events in Seattle, Portland, and Washington D.C. Their activities have significantly increased during the fall of 2020. Of particular note with Montana Proud Boys, as with other members of the far right in MT, there are a lot of guns and these MT PB have access to militia-level of guns and ammo. Therefore, consider this a general content warning. 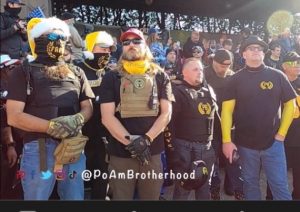 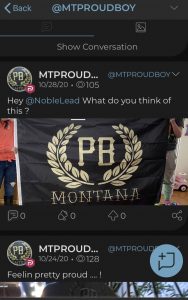 While there are more than two Montana Proud Boys, we will first introduce Dallas and Mike because they traveled from Montana to Washington D.C. twice, first time with the intent of attacking Black Lives Matter; and, second time, as part of a premeditated attempt to overturn the results of a democratic election. 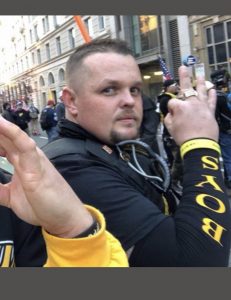 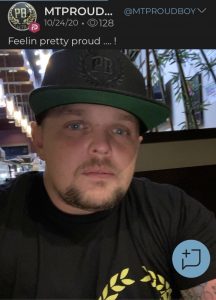 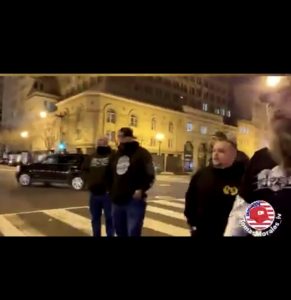 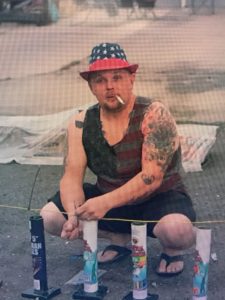 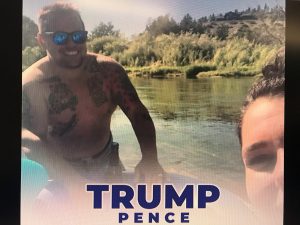 (Above, Dallas Davis from Helena Montana)

Dallas grew up in California and moved to Montana from Bakersfield in 2017. In CA, Dallas was involved in minor criminal activity and low level drug trafficking. Normal there is no issue with being involved in crime, and we are opposed to the criminalization of drugs. However, this information is included simply to point out the hypocrisy of those who claim to support the police. In Montana, Dallas worked at a water sports rental business that closed in the summer of 2020 as customers evaporated due to Covid concerns. Contacts to his current employer are being made by local activists.

Dallas is one of those many reactionary conservatives that might very well be violent, but can also do some good things. For instance, Dallas has volunteered for a few years helping people whose cars get stuck in the snow. But this volunteer effort is similar to his and the Proud Boy claims that they are fighting to protect America; it is a narrow definition of America, one that only includes people that look and think like him. He traveled across state lines to join in the commitment of racist crimes and to stand firmly in opposition to the idea that Black Lives Matter while rioting and seeking to overturn the results of a democratic election. For Dallas and the other Proud Boys, if you aren’t cisgender, white, conservative, and US born than you don’t count as a full citizen and thus your vote is illegitimate and you deserve to be violently assaulted in the streets.   This leads me to the next Montana Proud Boy we have the displeasure of introducing: Michael Ronayne. 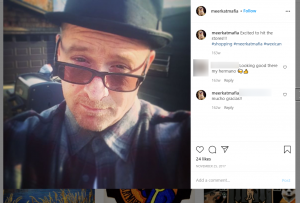 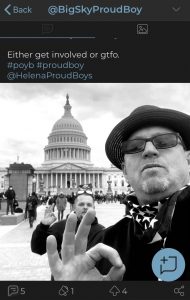 (Above: Michael Ronayne posting under name MeerkatMafia, and Mike and Dallas flashing white power hand symbol while in D.C. on January 7, 2021 the day after they participated in the storming of the Capitol.)

Michael Ronayne is a 51 year old former tradskin head from the Bay Area. He goes by the online names Bike Sky Mike, Big Sky Proud Boy, SockPuppet 1, and Meerkat Mafia, which seems to be a sticker patch organization that he claims to have founded. He moved to Boulder Montana several years ago. He worked as a pharmacy tech for a bit until he was fired. He is now self employed, primarily as a painter, registered with the state under the name Traditional Furnishings. Mike claims that he is not racist or a bonehead, merely a skinhead. We have no problem with skinheads; many of us grew up in the punk scene. But Mike has white straight laces on his Docs. If you’re not familiar with skinhead culture, that typically implies the owner of those Docs supports white power. Mike also likes to take selfies flashing the white power hand sign. Now, some might say that he is just using the OK hand symbol or playing the circle game. However, it was not until the OK symbol became coopted by the right to stand for white power that Mike first started showing it off publicly in photos. More over, Mike is a big fan of the racist apartheid state of Rohdesia. For those unfamiliar with Rohdesia, it was a break away state in South Africa where white people, alarmed at the prospect of black African self-rule and decolonization, proclaimed their own state based on militant white power and racism. Rohdesia lasted from 1965 until 1979, with the Republic of Zimbabwe forming in its place in 1980. Make Zimbabwe Rohdesia again is a racist rally call used by white supremacists all around the world. So, using such language really calls into question Mike’s claim that he is not a racist. 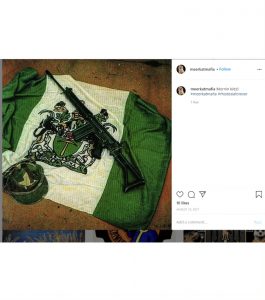 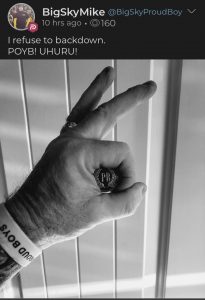 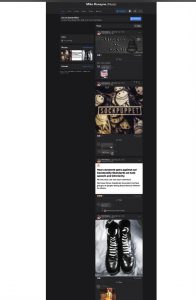 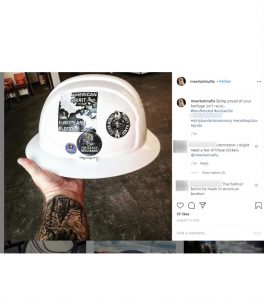 Mike is not only a racist supporter of white power, when called out for being racist he makes the even more problematic claim that he self identifies as Mexican and thus isn’t racist. There is a lot to unpack here. First, several Montana Proud Boys are “self-identifying” as Mexican because they think it’s a funny way to stick it to the liberals. It is also them mocking gender queer, non-binary, and trans individuals. Third, these claims are a cheep deflection away from having to explain their racist statements. Last: Mike is Irish; and, moreover, he is really proud of his “European Blood.” His use of the phrase “European Blood” should raise red flags for anyone who is even just a little bit familiar with fascist language. The use of “blood,” as compared to even heritage, reflects the Nazi Germany slogan “blood and soil” which referred to the Nazi ideal of a racially defined and pure national body.

It should be clear now that Michael Ronayne is racist. But now lets dive into how he is an active threat to not only Boulder and the rest of Montana, but also the rest of the nation since he has traveled to DC at least twice to join the Proud Boys in committing violent attacks. First, Mike has a rather large collection of guns, mostly assault rifles. It’s not that unusual for someone in Montana, particularly a more rural place like Boulder, to have lots of guns. However, Mike has an unusual collection of weapons that are designed more for gorilla warfare than hunting or self-protection including an assault rifle that Mike claims was from the Rhodesian Bush War. Moreover, unlike the Montana Militia and other reactionary and neo-fascist groups in Montana, which are also racist and have lots of guns, Mike has shown a willingness to leave the woods and travel to liberal cities with the intention of attacking leftists. For example, recently during the January 6, 2021 Washington D.C. right wing riot and Capitol attack, Mike was seen at the front line of the assault near the fence along side known reactionary Joe Biggs. 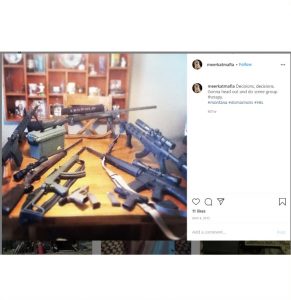 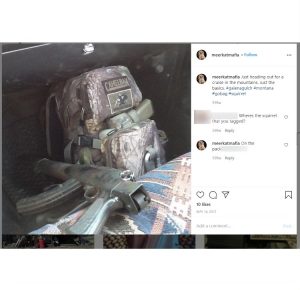 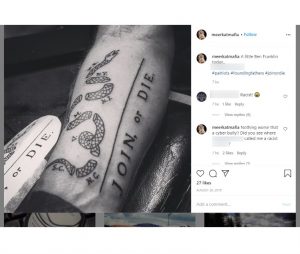 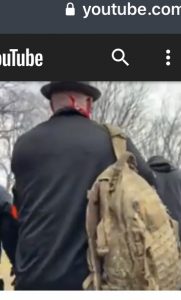 (Above: Mike and his collection of guns). Large amount of guns, a tattoo that says “join or die” and a willingness to travel across the country to attack those he disagrees with politically, should make it clear that Michael Ronayne is a dangerous, active threat to his local community of Boulder Montana, the state of Montana, as well as anywhere else he happens to travel particularly Washington D.C.

Photos are coming in faster than there is time to process, but this will be updated with more information shortly.

Finally, it should be noted that all of this information came from publicly available data and sources. These photos were freely posted on the internet, publicly, by the individuals themselves, thus eliminating any expectation of privacy. This expose has been the result of hard work by several activists from Montana and elsewhere who are dedicated to keeping their communities safe from fascist violence. This is an active project, and our deep gratitude and thanks goes out to all who provided tips as well as those who are activly involved. If anyone has any information about these Proud Boys, other Proud Boys as well as any other active right wing threats in the state of Montana, the general Pacific Northwest, or anywhere else, please contact mountain161@protonmail.com