Hello, this post will introduce you to Montana Neo-Nazi Jesse Herring.

Following this stunt, calls went out to identify this nazi. While his name was not confirmed until just recently, it was known at the time he was associated with the Kalispell Pioneer Little Europe or PLE. PLE are essentially whites-only communities, more info from the Southern Poverty Law Center: https://www.splcenter.org/fighting-hate/intelligence-report/2013/closed-circuit

“The Pioneer Little Europe (PLE) concept was developed primarily by Hamilton Michael Barrett and Mark Cotterill, two white supremacists with both British and American connections, in the late 1990s and early 2000s. Essentially, PLEs recognize that grandiose plans such as the Northwest Territorial Imperative are doomed to failure, because white supremacists exist in too few numbers. The PLE concept argues instead for white supremacists to gather in already existing communities and form communities within a community so that “racially conscious” whites can survive (Barrett once called them “arks of survival”). Non-whites would theoretically depart, leaving white supremacist enclaves whose members would aid and assist each other.”

The PLE formed in Kalispell Montana when white nationalist April Gaede moved from California to the Flathead Valley in NW Montana in 2008 and began actively recruiting other white nationalists from around the country to move their as well. While the project only had limited sucess, it did attract vile nazis to the area. Following the formation of the PLE in Kalispell, particularly the PLE members showing holocaust denial films, community members formed together to create an affiliate group of the Montana Human Rights Network called Love Lives Here. These outraged community members, helped by ex-white nationalists who had left and denounced the movement, more or less were successful in forcing the nazis back underground and dismantling the PLE online presence. However, there are still a number of white nationalists and neo- nazis who had moved to the Kalispell area for the PLE still living around NW Montana. One of those recruited to move to Montana was Jesse Herring (Jesse goes by Rockwell’s Return, more on that latter). Although the PLE is gone, too many nazis remain and there are continued efforts by white nationalists to recruit fellow nazis to move to the Kalispell area. For more information about the Kalispell PLE and the nazis it attracted, please visit the Newsletter Archive page of the Montana Human Rights Network website: https://mhrn.org/reports/

Another stunt that Jesse pulled on behalf of the Kalispell PLE was going to bars in Flathead County wearing a swastika arm band.

Unsurprisingly, Jesse didn’t last very long in the bars he showed up at before people kicked him out. The bars he went into were in very small towns outside of the Kalispell area. And, even though many people in these towns are conservative, the communities were still not very happy about having a swastika wearing nazi show up. At any rate, Jesse was chased out of the bar and had to be picked up and “rescued” by another PLE member, likely “snowwhite1414.” Local activists, who were unable to positively ID him at the time, so they turned him into a meme.

After Jesse was chased out of several bars for being a nazi, his friends at the PLE were not too happy. The put a call out on their Facebook page (the page is long deleted) asking for ID on those who confronted Jesse and forced him out of the bars.

*the faces of those who confronted Jesse have been blacked out.

So, now, how do we know that this particular nazi is names Jesse Herring. Good question; here is the proof:

Jesse posts on Facebook under name Rockwell’s Return. When some folks said Jesse had to be rescued by his mom after being chased out of bar, he replied:

Side note: the name Rockwell’s Return refers to George Lincoln Rockwell who founded the American Nazi Party in the early 1960s.

Lots of nazis use name Rockwell so it was difficult to narrow down until he posted some new pictures of himself in late January 2021. One of the photos posted on the Rockwell’s Return Facebook also happened to match the photo on a Eth. Nat. Network You Tube page 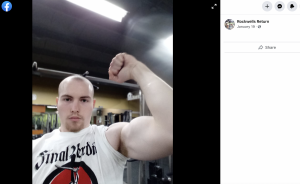 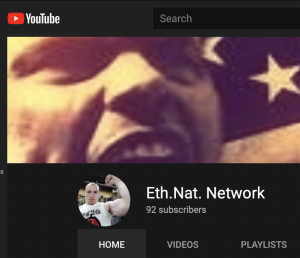 Looking at videos posted on this Eth. Nat. Network channel, Jesse introduces himself and shows the same flag he was flying on the streets of Kalispell. 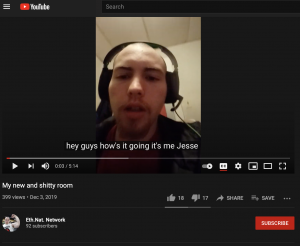 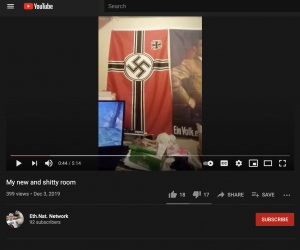 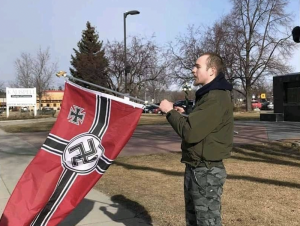 Then we found his BitChute channel, and he conveniently posts the name Jesse Herring and Rockwell’s Return together.

As you can see, Jesse convienently published both his name Jesse Herring and Rockwell’s Return in one location. For those unfamiliar with Bit Chute, it is a cesspool of white nationalism, trolling, hate, violent threats, nazi propaganda. Here are some of Jesse’s comments.

While Jesse has not been as active in the last few months or so, in that he hasn’t posted videos since fall 2020, he is still posting racist comments on BitChute and likely elsewhere as recently as January/February 2021.

So, we here at Montana AFA feel very confident in our identification of Jesse Herring, DOB 9/8/1997, as the person behind the nazi Facebook, You Tube, and Bit Chute accounts Rockwell’s Return. Although the last time Jesse was seen publicly wearing nazi attire was February 2020, he most likely still lives in the Kalispell area. However, he is from California and and his family still lives there. According to Jesse’s You Tube video uploads, he was in San Bernardino in September 2020. Jesse also has a history of having lived in Minnesota and Wisconsin.

If anyone has any further information or questions about Jesse, the Kalispell PLE, white nationalist activity in Montana, please feel free to contact us at mountain161@protonmail.com